The most peculiar injury risk in college football: 10 hours a day in dress shoes 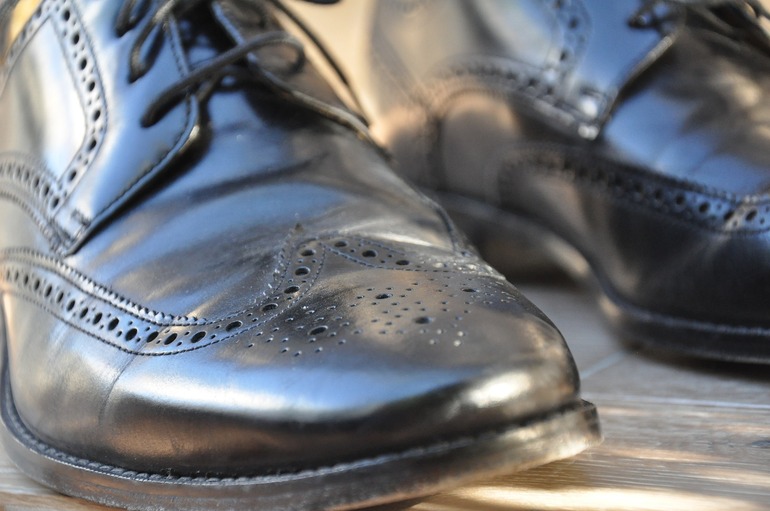 Article by Gene Wang via The Washington Post
August 30th, 2017

It took three straight losses — including, most painfully, to Army — for Navy’s football coaches to start talking about their players’ shoes.

Their team had fallen to its archrival in December for the first time in 15 years. A litany of players missed the game because of foot injuries, most notably quarterback Will Worth, slotback Toneo Gulley, linebacker Daniel Gonzales and wide receiver Tyler Carmona. Slotback Josh Brown sat out with a sprained ankle.

Several weeks later, after a 9-2 start to the season dissolved into a 9-5 finish, Coach Ken Niumatalolo and his staff began the unpleasant task of evaluating what had gone wrong.

Their conclusion: a potential injury risk that almost no other team in major college football has to consider.

Unless the Midshipmen are participating in athletic activities or in their dorm rooms, they are forbidden by U.S. Naval Academy rules from wearing sneakers or flip-flops. For them and the rest of their classmates, hard-soled Oxfords shined to Navy specifications, paired with a uniform of service whites or dress blues, are required.

And they get one pair of shoes, issued when they’re plebes, that they typically wear for four years.

“We had a huge summit among the training staff, the weight room staff, equipment people,” Niumatalolo said. “What could it be? Somebody brought that up, and I thought it was a pretty valid point. Guys are walking around in hard-soled shoes all day.

“I have a hard enough time wearing tennis shoes.”

The stress on a pair of shoes used for roughly 10 hours each day for the length of a college career frequently leads to considerable wear on the heel, sole or both. That deterioration in turn can lead to supination in the foot, according to Jim Berry, Navy’s assistant athletic director for sports medicine.

“We recognized that a lot of these kids, their foot injuries could be caused by their uniform shoes,” Berry said. “We noticed some of the kids, their heels were starting to wear, kind of like dress shoes you might have had for a few years. Your back heel is kind of worn out.”

Before the start of his 10th full season at Navy, which begins Friday night with a game at Florida Atlantic, Niumatalolo mandated his players have their shoes cobbled if they discovered noticeable wear. Midshipmen have access to a cobbler shop in Bancroft Hall, the largest dormitory in the world, and many players had their uniform shoes repaired during the offseason.

Precautionary measures didn’t end there. A team of specialists from Walter Reed National Military Medical Center in Bethesda went to campus to analyze players’ feet. Included in the procedure was assessing how players stood up and whether they rolled their feet in or out during that process.

Players deemed at a higher risk for foot or ankle injuries were fitted for orthotics to be used in their uniform dress shoes and, in some cases, for their cleats as well. Carmona, a senior wide receiver who started 11 games last season before suffering a Lisfranc sprain in his right foot, is among those wearing customized orthotics in both his uniform shoes and cleats this year.

“It seems to make a difference,” Carmona said after practice earlier this month. “Me personally I have a high arch, so the orthotics just kind of takes away the gap. I mean, I’ve felt the difference. I feel more secure.”

While Niumatalolo and his staff have not uncovered a definitive link between well-worn dress shoes to elevated instances of foot injuries, some data suggests a correlation, according Thomas Sanders, a Falls Church-based sports orthopedist who specializes in foot and ankle injuries.

“Certain types of injuries I would say it certainly increases the risk for,” said Sanders, a former all-American rugby player at Virginia. “I would think stress fractures would absolutely be created in that setting because dress shoes tend to be tighter. They tend to not have as much support, especially if you’re doing a lot of standing.

“Stress fractures are known to be more common in marchers and in military recruits.”

Sanders added that Lisfranc injuries, which involve bones or ligaments in the middle of the foot, also could be associated with compromised dress shoes, assuming an individual has been standing a great deal, although that connection is a bit more blurred.

Navy’s triple-option offense might be a factor as well, Sanders indicated, because of the constant and often sudden change of direction required in such formations. The Midshipmen have employed the triple option since former coach Paul Johnson arrived in 2002 and hired Niumatalolo as his top assistant.

“The guys are so big and strong and fast now,” said Niumatalolo, who took over full-time in 2008 after Johnson departed for Georgia Tech. “All the stops, starting, planting, it’s a lot of torque on your feet.”

In addition to remodeled guidelines regarding dress shoes, Niumatalolo, his assistants and medical staff have updated practice and game-day preparations to curtail foot injuries.

It starts with new “foot activation stations” in the locker room. There, players must undergo rigorous foot warmups before getting taped. Trainers have been instructed to ask players once on the training table if they have complied.

“If we haven’t done it, we have to go back and do it,” said Brown, who missed six games last year with a sprained ankle. “There’s just a lot more preventive stuff in the training room nowadays.”

Players also are set to receive fresh cleats far more frequently from Under Armour, Navy’s athletic apparel sponsor since 2014. The goal is to have new footwear available every couple of games.

During the offseason, Baltimore-headquartered Under Armour sent representatives from its design team to the academy to educate the coaching staff and players about its cleats, informing them of various options depending on a particular need.

If, for instance, a player has turf toe, Under Armour can provide a partially or fully stiffened shoe at the request of Berry in consultation with Greg Morgenthaler, the football team’s director of equipment operations. The same applies for players in need of wider cleats and those who require more stiffness in the front of the shoe or the back.

“It’s been a whole process,” Niumatalolo said. “All of us, myself, all of us have to learn better because people get hurt, but it can’t be because of our negligence. We’ve got to do the best we can and make sure that we look at everything, look under every stone.”