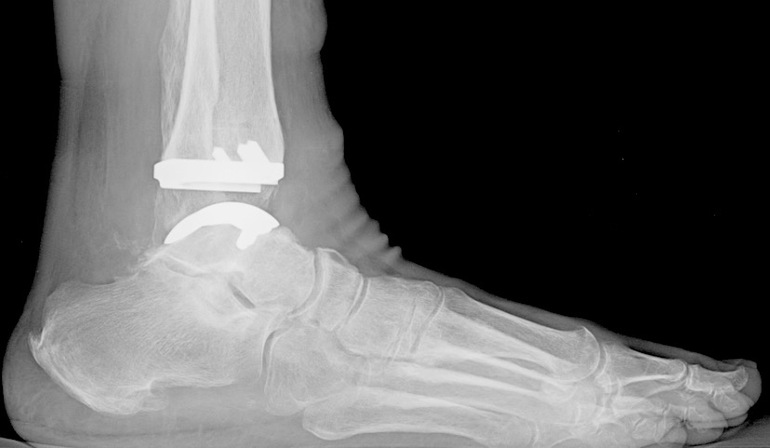 Ankle replacements, a new kid on the block compared with knee and hip replacements, used to be deemed a risky bet for patients under 65.

But as doctors steadily gain confidence that the replacements will last, Carrie Kvitko, 60, from Columbus, Ohio, is one of a growing group of younger patients to sport a new ankle, made of metal and plastic and bending nearly as well as the original. In September, a year after her surgery, Mrs. Kvitko went on vacation to Magic Kingdom Park in Orlando and climbed 116 steps to the top of the Swiss Family Tree House.

Nearly 10,000 total-ankle-replacements will take place this year in the U.S., about double the level in 2011, according to estimates from SmartTRAK, an online market-data system from BioMedGPS LLC of Irvine, Calif.

That growth is due in part to mounting evidence over the past several years that a particular device is long-lasting. Most recently, at a scientific meeting in September in Lisbon, Duke University researcher James A. Nunley presented data on Stryker Corp.’sStar ankle. The finding: For a group of patients who took part in a trial before the device hit the U.S. market in 2009, 88% of 58 devices were still in place 10 to 19 years after implantation.

There are limits to how much ankle replacements can replicate healthy ankles. They aren’t meant to take running or jumping, says Lew Schon, an associate professor at Johns Hopkins School of Medicine and co-designer of a replacement ankle from Zimmer BiometInc., in Warsaw, Ind. You can run and jump, but the unit will wear out faster. It is possible to ski, though, Dr. Schon says, since skiing has less impact on an ankle than, say, jumping.

Recipients also could need follow-up surgery. A study presented last year at the American Orthopedic Foot & Ankle Society meeting in Toronto found that 25% of 761 patients needed some type of repeat surgery during a 15-year period, such as replacing the plastic parts of the device, which tend to wear out faster than the metal components.

“Getting a total ankle [replacement] is like getting keys to a car,” says Gregory Lundeen, a Reno, Nev., orthopedic surgeon who trains surgeons in implanting the Star. “You have to have it serviced on a regular basis.”

While ankle replacements typically occur later in life, the cause isn’t usually arthritis from simple wear and tear, as it is for hip and knee replacement. Ankle arthritis is usually the result of past trauma, such as a broken ankle, says Gregory C. Berlet, a surgeon in Westerville, Ohio, and design consultant to Dutch medical-device company Wright Medical Group NV, which sells three replacement ankles in the U.S.

Patients often live with ankle pain for decades, until the cartilage layer fully wears down, and medication or rest no longer offer relief. The standard treatment has long been fusion, or screwing the ankle bones together. That surgery typically lasts a lifetime, but the loss of motion puts strain on other joints in the foot—often making them arthritic, says Razi Zaidi a researcher at the Institute of Orthopaedics and Musculoskeletal Science at Royal National Orthopedic Hospital in London.

Fusion also requires some compromise, Dr. Schon adds: You may have to walk duckfooted up a steep hill, and your ankle won’t bend enough to get into most ski boots, or play an organ in church.

The cost of total ankle replacements varies widely, from $19,000 to $30,000 or more. Insurers generally cover the procedure, minus deductibles, says Thomas Loring, senior director of research and development at Stryker, in Kalamazoo, Mich. To better reflect actual costs of the procedure, as of Oct. 1, Medicare raised the reimbursement by 55%, according to a spokesman for the Centers for Medicare and Medicaid Services.

As more newly minted ankles are implanted, surgeons caution that popular new products, such as Zimmer Biomet’s, and Wright’s Infinity, both of which hit the U.S. market in 2014, don’t yet have long-term data.

“A younger patient, 50, early 60s, wants to know how long does it last? You have to look them straight in the face and say, ‘We have no idea,’ ” says Christopher E. Gross, assistant professor of orthopedics at the Medical University of South Carolina in Charleston and co-author of the paper on repeat surgeries that was presented in Toronto.

Dr. Gross has no link to any company, but says he uses mostly Wright’s Infinity, because inserting it requires less bone removal than the company’s older model, the Inbone, potentially leaving patients in a better position if it does fail. As a ballpark estimate, he tells patients that 75% of them will probably still have their new ankle in 10 years and be happy with it.

When an ankle replacement fails, it is often because it loosens from the bone, causing gradually increased pain, surgeons say. The patient is in for a more difficult operation with a longer recovery than the first go-round because bone was removed during the original surgery and it is often necessary to graft new bone to replace it.

Options for patients with failed implants are growing. In July, Wright came out with Invision, a device intended for revision surgeries; it has a variety of thicknesses that can help fill the space left by lost bone. Zimmer Biomet offers revision devices custom-made to patient specifications, says Brad Quick, general manager of the company’s foot-and-ankle unit. Stryker is working on a revision product, Mr. Loring says.

Some younger patients are counting on good options being available when they need them. David Ventresca, a 54-year-old utility contractor from Annapolis, Md., got a new ankle in 2014 after his arthritis pain got so bad he was turning his golf club upside down to use it as a cane. He’s now back to golfing, and enjoying his skateboard.

Miss Johannes is a writer in Boston. Email: reports@wsj.com.

Appeared in the November 13, 2017, print edition as 'Ankle Replacements Take Off, As Devices Appear to Be Durable.'